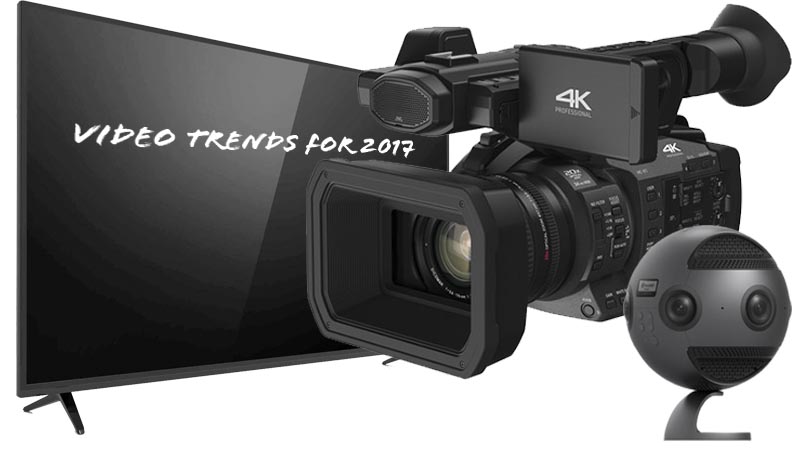 Video tech trends 2017 is all about change. The world of video production is constantly changing and evolving, and 2017 is proving to be no different from any other year in this respect. While it does not seem that a “game-changing” new technology will emerge in the industry this year, the trends that have been emerging over the last two to three years are poised to become the expected standards in video acquisition and delivery.

2017 may be the year that the video tech trend toward ultra-high definition (UHD) video becomes the norm in the world of video production. Most new professional and semi-professional video cameras now ship with the ability to capture footage in crisp 2160p, which is four times the number of pixels in 1080p HD. Why is capturing video in UHD important? For those who will deliver the finished video in 1080p HD, capturing at a higher resolution allows for reframing the shot, so that close-up shots, pans, and zooms that were not captured live during the video session can be added during the editing session. For those who wish to deliver video in UHD, major streaming services such YouTube now allow content to be streamed at 4K or below, which allows for high quality, inexpensive distribution of video content around the world. Furthermore, the price of UHD television sets and monitors has plummeted recently, with UHD models available within a few hundred dollars of comparable HD models.

Traditionally, professional video cameras have relied on an array of 3 small (1/3″ to 2/3″) sensors to capture video, with a prism behind the lens splitting the light and sending green, red, or blue light to each of the three sensors. Taking a cue from the DSLR video boom, more recent pro camera offerings are touting large (1″ or larger) single sensors in this video tech trend area. Panasonic seems especially devoted to this new philosophy, with at least four of their latest semi-professional video cameras sporting 1″ or micro 4/3 sized sensors. What makes a camera with a larger sensor beneficial to a video production? Larger sensors tend to offer a shallower depth-of-field, meaning focus can be more selective. The ability to selectively focus on the subject of a video, while leaving other objects out of focus, can be not only more aesthetically pleasing, but integral to the storytelling process. Larger sensors also tend to have larger photosites – the light gathering parts of the sensor – which allow for better image quality in low light. There are a few drawbacks to using cameras with larger sensors – it is sometimes difficult to focus on a subject quickly and color may not be reproduced as well by one sensor as opposed to three – but for many markets such as news gathering and documentary work, the benefits will likely outweigh the disadvantages.

360º video is looking to be even more popular this year than last. High quality entry level solutions from Nikon and Samsung became available late in 2016 for under $500 each. On the professional side, it is becoming apparent that capturing and delivering 360º video content at 4K, the current standard, may not be considered by some to be an acceptable level of quality. Reasons for this include re-encoding of the video by streaming sites (which reduces files sizes but also softens the video) and the fact that the video is scaled so that only a portion of the scene can be viewed at any time. For this reason, some new professional level 360º cameras will soon be recording video at 8K resolution. One of the first of these new cameras in this video tech trend is the Insta360 Pro, which will be available soon at a projected price of $3000. In addition to 8K recording, it will allow 3D recording at 6K and streaming 360º video at 4K. As the quality of these cameras goes up and cost of entry comes down, we should expect to see a great deal more 360º video content including narrative work, virtual tours, and streaming content that allows virtual attendance of conferences, classrooms, and the like.

One of the most exciting video tech trends of 2017 is the move toward more narrative, even experimental, work. High profile companies such as BMW, H&M, 84 Lumber, Kodak, and Lyft have recently taken a chance producing what are essentially short form movies with a storyline or resolution that promotes their brand. Qualcomm even produced a 30 minute mini-feature called “Lifeline” in which cellphones utilizing their Snapdragon processors are vitally important to the action occurring in the film. Often these productions, collectively referred to as “branded content,” feature very little to no dialogue, relying instead on visuals to push the message. Because productions such as these often do not neatly fit into a 30 or 60 second time slot, they tend to be aimed at customers in the 18-35 year old demographic, who spend less time watching television than previous generations and more time watching videos online, where longer, more engaging videos have found a niche.

Finally, a recent Think with Google report stated that 85% of adults aged 18-49 view content on two devices simultaneously (ie: watching television while browsing Facebook or YouTube on a smartphone or tablet). With the viewer’s attention divided in such a way, it is vital to produce content that is more compelling and engaging than ever before.

Be sure to follow our other blog articles to learn about other emerging video tech trends in 2017.