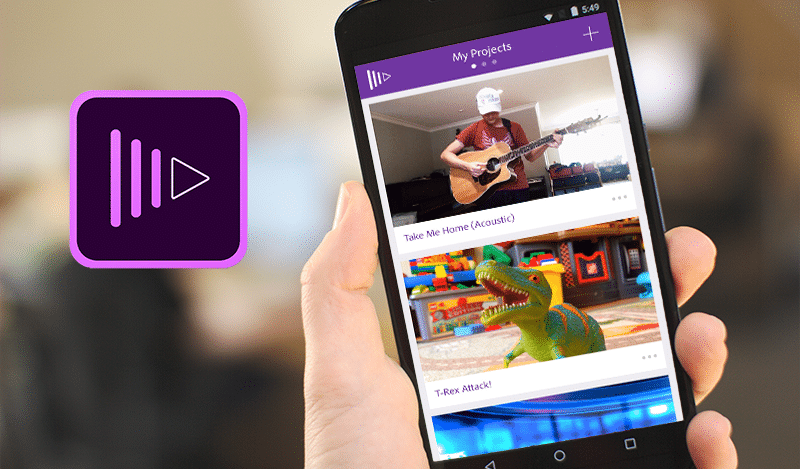 Adobe just released Adobe Premiere Clip for Android. The app has been out on iOS for a while, but seeing as how I’m totally in the Google camp with my portable devices, this is the first opportunity I’ve had to really take a look at it. The app is free, though you need to have an Adobe Account to use it due to the sharing capabilities and built-in music/video FX.

Coming from Adobe Premiere Pro it is a very different feel, clearly geared more toward casual and fun use rather than as a portable powerful editing program. It’s more akin to a trimmed down version of Premiere Elements. I was rather skeptical at first, but there are some nice features available, even though the actual editing and export capabilities are rather limited.

Starting up a project allows you to import photos or video from your phone, Lightroom, your Creative Cloud account, or capture new ones. Then you pick the type of project you want: one where Premiere Clip generates the edit for you based on the music you pick, or a manual edit. Picking the manual option lets you trim video clips, rearrange the order of clips and photos and apply adjustments to exposure or add Instagram style filters for a look. You can add music from your phone, or use one of the provided tracks. Once you are satisfied with your edit, you can export right to YouTube, share it on Adobe’s cloud, save it locally, or export the edit to Premiere Pro so you can do finishing work, like titles or other graphics. There aren’t any options for size or data rate, just an export button, so control of the output is limited.

Premiere Clip is clearly not meant to replace Premiere Pro. Heck, it is designed with an export to Premiere Pro button so you can start your edit on your mobile device and move it to the full-featured editor. This process isn’t without its snags (the push in on the photos that Premiere Clip automated for me didn’t carry over in the XML import into Premiere Pro) but it is interesting to see how they are trying to integrate it all. Premiere Clip does make for a handy tool to put together a quick video for YouTube or Facebook. Hopefully, Adobe will add in features like chroma keying and titling, as well as give you more control over the export options in the future.